Affordability and revenue stability are two of the topics that often weigh heavily on the minds of utility managers and policy makers.  As two equally important issues, it can be challenging to meet both due to potentially opposing objectives.  The most straight-forward path to achieving a high level of revenue stability is to rely heavily on the fixed component of the rate structure.  In spite of the revenue stability that comes with a rate structure that does not contain a volumetric component, few water systems take that approach for a variety of reasons.  Figure 1 shows the percentage of respondents to the 2018 AE2S Nexus rate survey that reported a fixed charge-only rate structure. 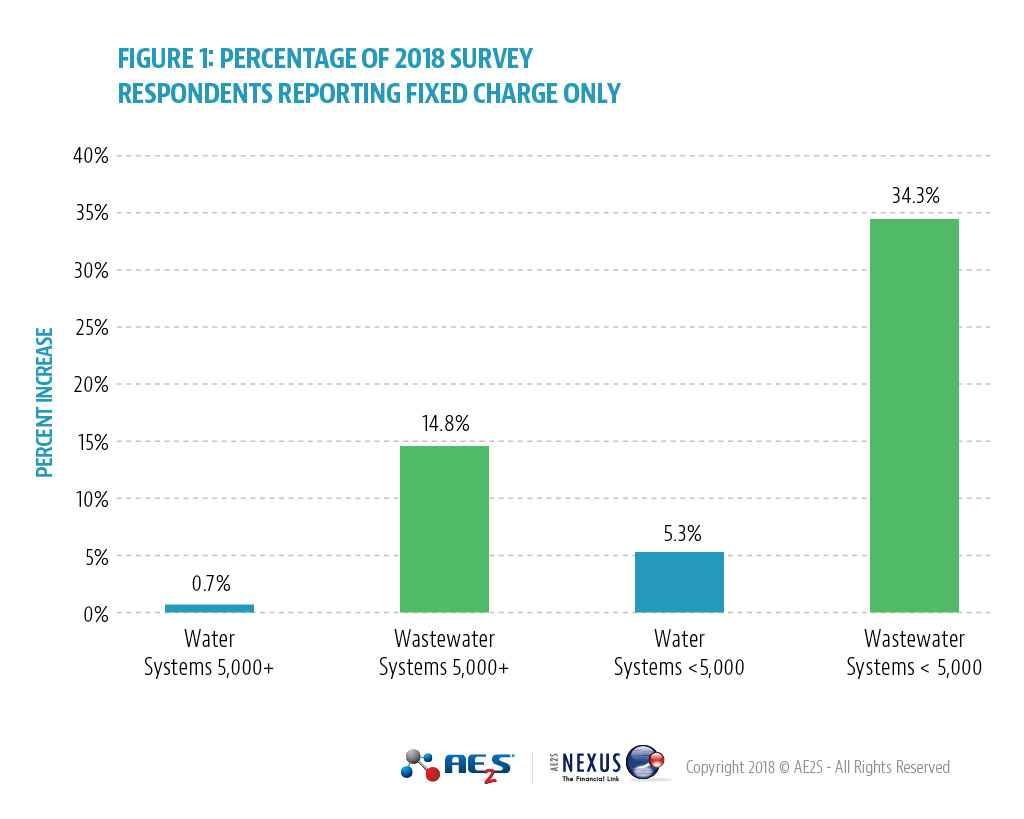 Figure 1 shows that although the fixed charge-only approach is not popular among water utilities, it is in greater use by wastewater systems.  The steady revenue stream is attractive particularly for smaller wastewater systems with relatively low operating expenses, small user counts, and predominance of domestic strength wastewater discharges.  Even for larger wastewater systems, if the user classes are homogeneous, the flow and strength may not vary much by user class and may not require a detailed set of rate classes and structures.

For water systems of all sizes, however, fixed rate structures are typically less attractive.  Rate structures that do not vary according to water use:

*Do not provide users with the ability to control their bills by adjusting usage habits,

*Do not encourage responsible water use,

*May not be representative of the demand different customers place on the system, and

*May be viewed as unaffordable for low volume/fixed income users.

Establishing a fixed charge is a best practice for achieving revenue stability.  For that reason, the majority of systems utilize a combination of fixed and volumetric charges.  The question then becomes, for the fixed charge, what is the magic number?

It is often useful to benchmark a utility’s rate against others in the region.  Figures 2 through 5 provide some perspective on fixed charge approaches around the region based on values reported in the 2018 AE2S Nexus Utility Rate Survey.  Figures 2 and 3 illustrate the average, minimum, and maximum fixed charges reported for water and wastewater systems, respectively, for systems serving 5,000 or more people. 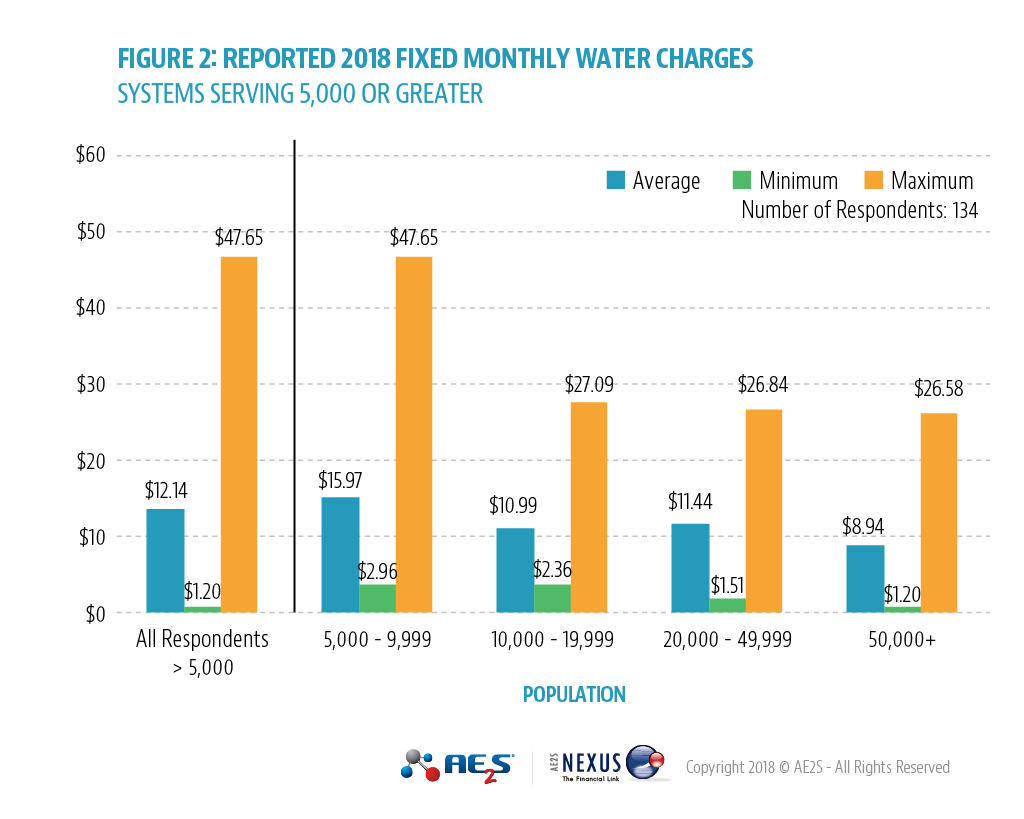 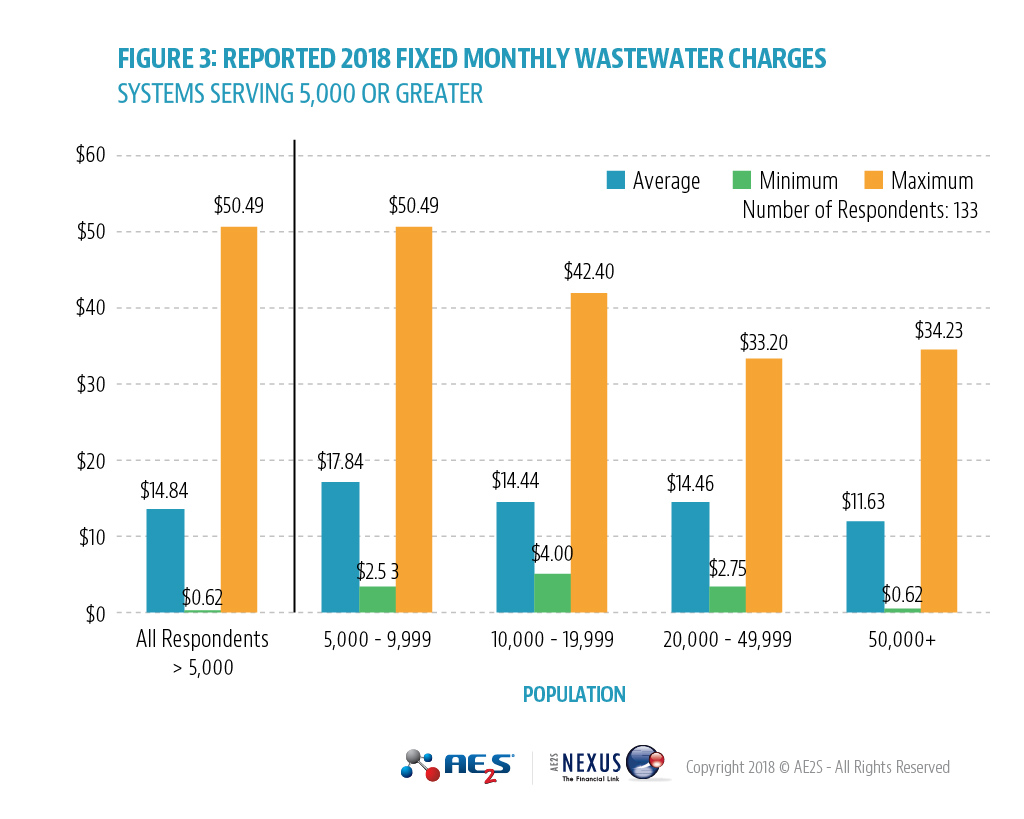 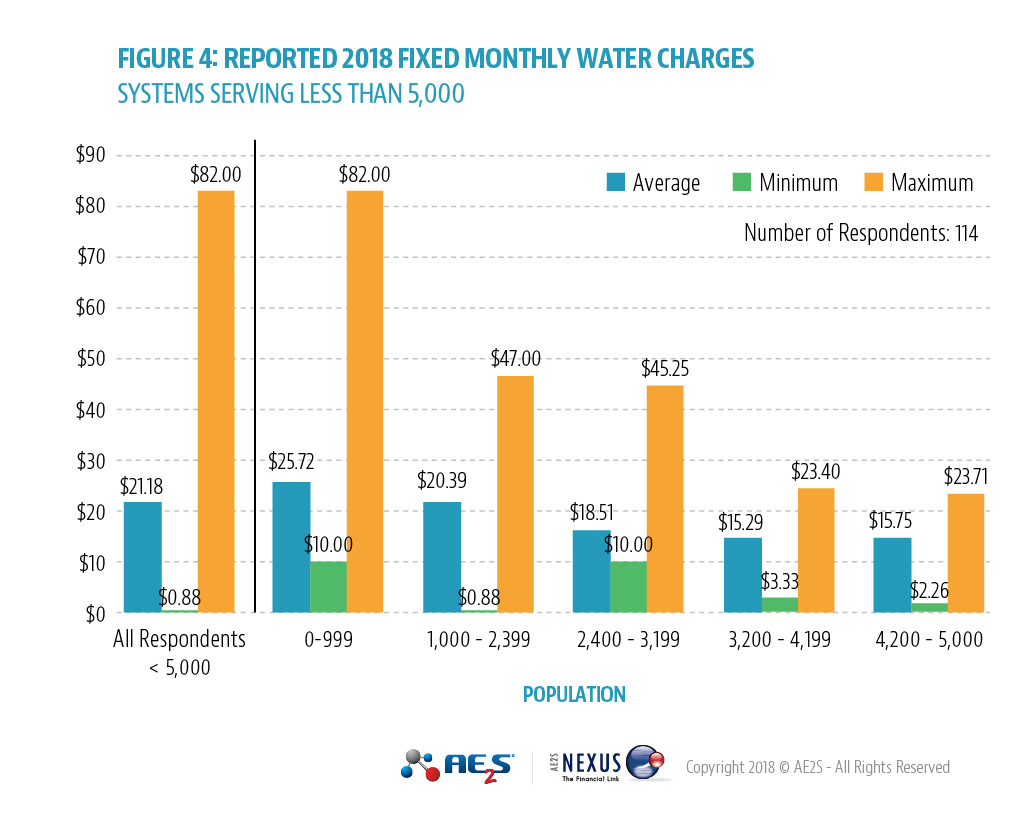 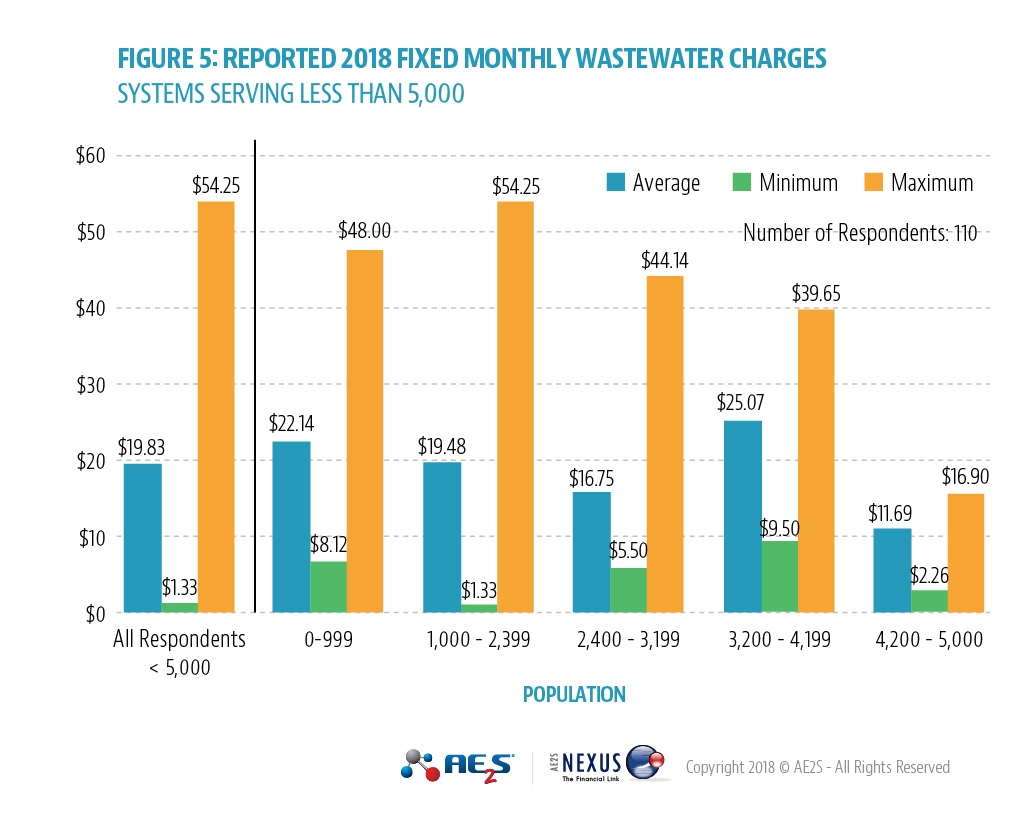 So how should a system go about determining if its fixed charge is appropriate?  For both water and wastewater systems, a portion of the revenue requirements is fixed and will not vary significantly whether water sales or wastewater flows are record highs, record lows, or average.  Further, adequate revenue to service system debt is required to be demonstrated annually.  When evaluating the suitability of the existing fixed charges, there are several considerations, including the types of revenue requirements commonly associated with revenue from a fixed charge, and the amount of water or wastewater, if any, covered by the fixed charge.

You have probably heard a rate consultant give the classic description of rate design as being “more art than science”.  Not very helpful, right?  As is always the case, the reasonable approach to rate planning varies from one system to the next based on overall philosophy and objectives of the community.  The following list identifies some of the most common revenue requirements used to calculate fixed charges for a system.  Common fixed charge components include costs associated with:

*Some portion of debt

With the focus today on efficiency and conservation efforts to reduce cost and delay major capital investments when possible, there are probably more drawbacks to including volume in the fixed charge than benefits.  Although the cost of the “free” water is built into the fixed charge, by not identifying that cost, the rate structure does not convey the value of that volume, and thus does not encourage responsible use.  For very small users that may not use the amount included in the fixed charge, it can be perceived as unfair to charge the same as a customer that uses more.  Such disparities are instances where affordability can become a concern.  It would benefit such customers to remove the volume from the fixed charge, lower the fixed charge, and subsequently charge a volumetric rate for what the customers actually use. 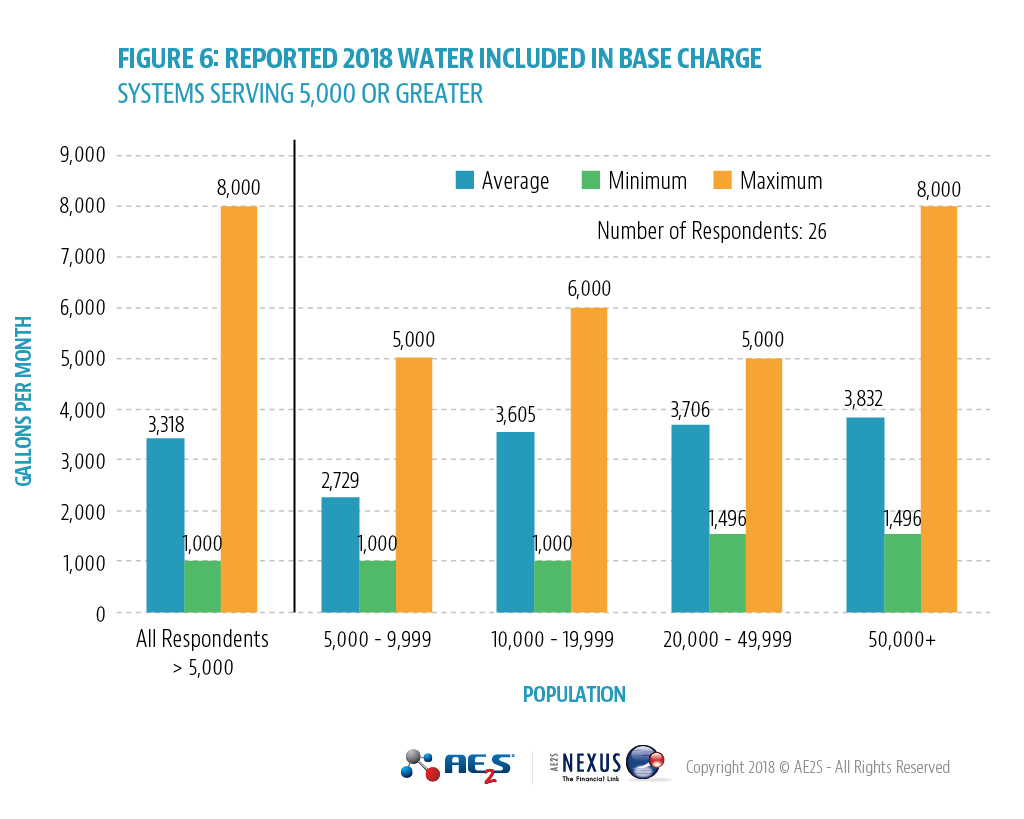 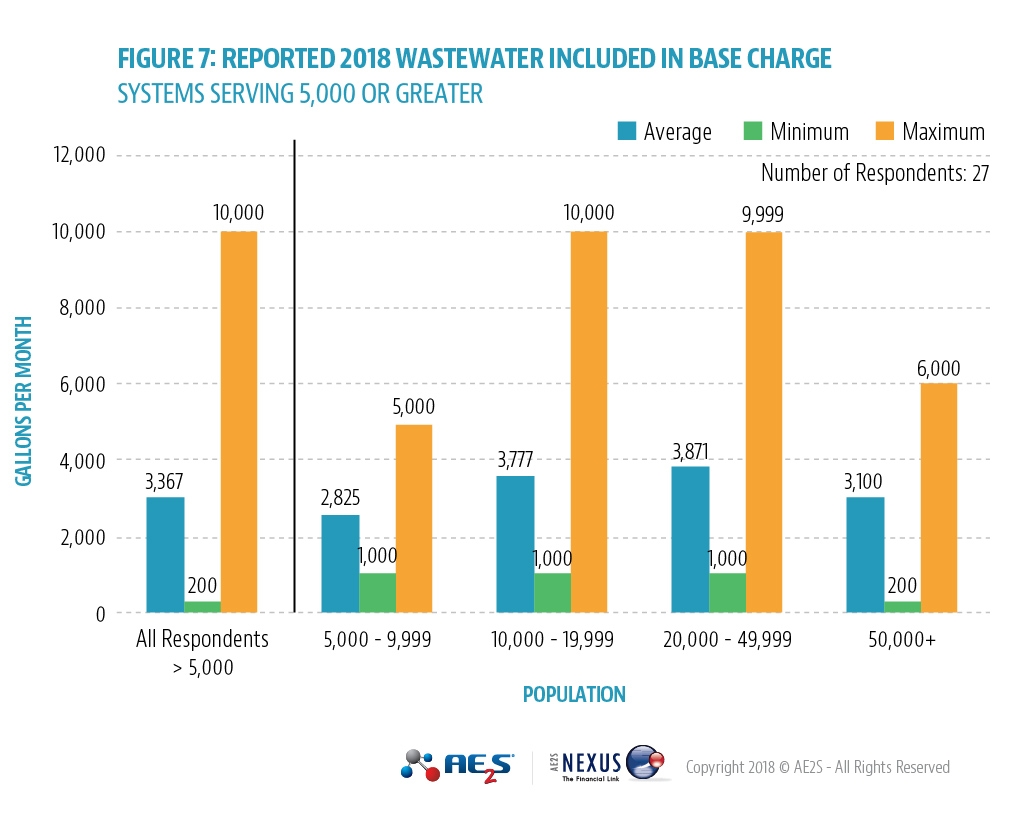 Utility rates are the key to revenue generation.  A steady revenue stream is a benefit to financial health, but fairness and affordability are important to maintaining consistent use and maximizing revenue collection rates.  It is beneficial for utilities to periodically review the fixed rate revenue stream and evaluate its appropriateness.  When planning changes, however, it is recommended that systems make adjustments gradually and take the time to educate decision makers and the customer base so that revenue stability can be maintained throughout the transition period.