This article was originally published in the January 2020 edition of The Western Planner.

As planners we often talk about creating a “Vision for the Future” for the regions and communities we serve. That vision may include elements of future land use, urban design, growth policies, housing, social justice, economic development, and the list goes on.

Inherent within the planning process is the need to plan for the infrastructure necessary to achieve the “Vision for the
Future”.  The planning process typically includes provisions for transportation infrastructure.  Other infrastructure, including stormwater management, is often overlooked; yet much of the work we perform has a direct relationship with stormwater management influencing the amount of runoff and being influenced by where the major runoff corridors exist.

In this article we will discuss a few of the important aspects of stormwater management that planners should be aware of, along with two project-specific examples of stormwater master plans.

Stormwater Management – Just a Good Idea, or is it Required?

The short answer – both.  Stormwater management is a combination of the need for protection of life and property against local and regional flooding and meeting regulatory requirements intended to protect the environment. Local
municipalities enact ordinances requiring mitigation for the increased quantity of runoff generated by development, installation of infrastructure to convey stormwater safely, and identification and preservation of drainage corridors. The Federal Clean Water Act, through the development of the National Pollutant Discharge Elimination System (NPDES), established the regulatory framework to improve surface water quality by requiring the reduction of pollutants that can be transported by stormwater into a storm drainage system and, ultimately, into a receiving water such as lake, stream, or river. Municipal separate storm sewer systems (MS4s), construction activities, and industrial activities are all regulated under the requirements of the NPDES.

It is inherent that the conversion of land from a previously undisturbed condition to a level of urbanization can affect the runoff characteristics. However, as communities grow and develop with increasing amounts of impervious area, the need to consider the effects on the environment become more important.

Public entities are placing a greater emphasis on creating master plans to address the health and safety and regulatory requirements associated with the management of stormwater, as well as the ongoing financial considerations that result from the construction and maintenance of storm drainage systems. The planning profession is well-suited to add value to these planning efforts.

Sioux Falls is located in the southeastern corner of South Dakota and has a population of approximately 190,000 residents. Urban development is planned to expand southwest of the City and having a stormwater master plan in place will be beneficial so as development progresses, the City, landowners, and potential developers understand how stormwater can be effectively managed. The project area included the City’s southwest growth area and is in portions of two separate watersheds that are primarily undeveloped and lie outside of the existing City limits.

The intent of the BMP Master Plan Update was to provide clear recommendations to the City regarding the management of stormwater runoff by identifying existing drainage patterns and developing conceptual layouts for regional conveyance and detention systems to mitigate the impacts of growth.

During the initial phases of the project, City Planning and Development Services staff provided future land use projections, aerial imagery, and contour information that was used to develop a stormwater model for the area. A series of conceptual regional stormwater facilities, arterial roadway crossing designs, and associated cost estimates were included in the final document. Figure 1 depicts the current land uses within the project area. 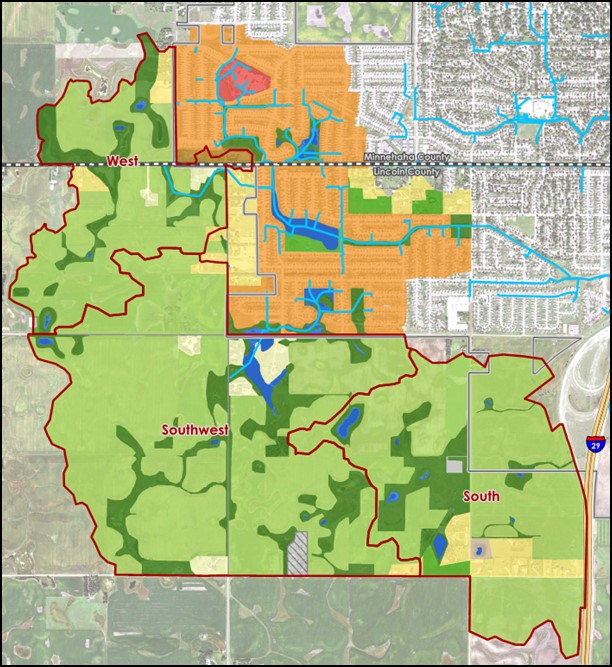 Figure 2 illustrates the locations for new drainage improvements and a corresponding table of capital improvement costs. 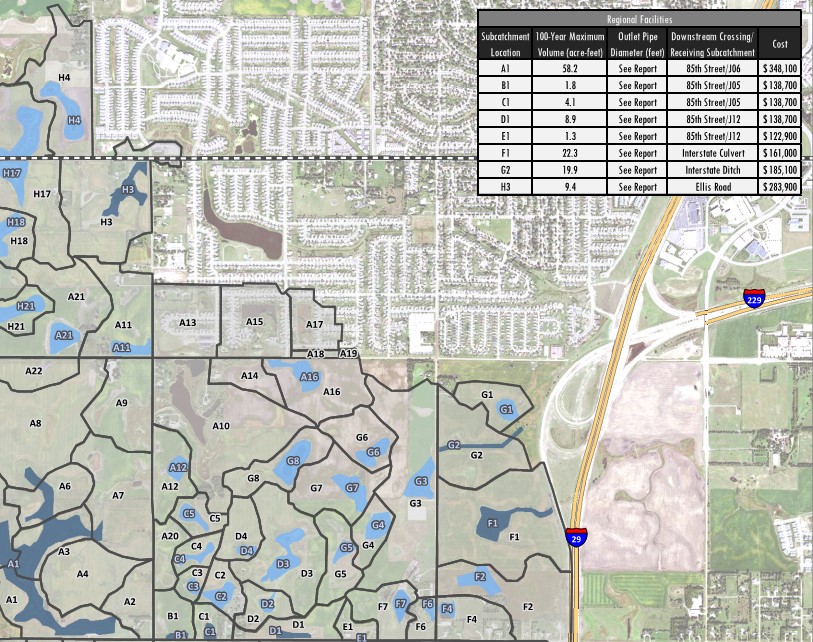 Kalispell is located within the Flathead Valley of northwestern Montana. In 2008 the City of Kalispell updated their Stormwater Facility Plan that identified short- and long-term stormwater management needs and recommendations throughout the community, including a series of improvements in two study areas shown in Figure 3. 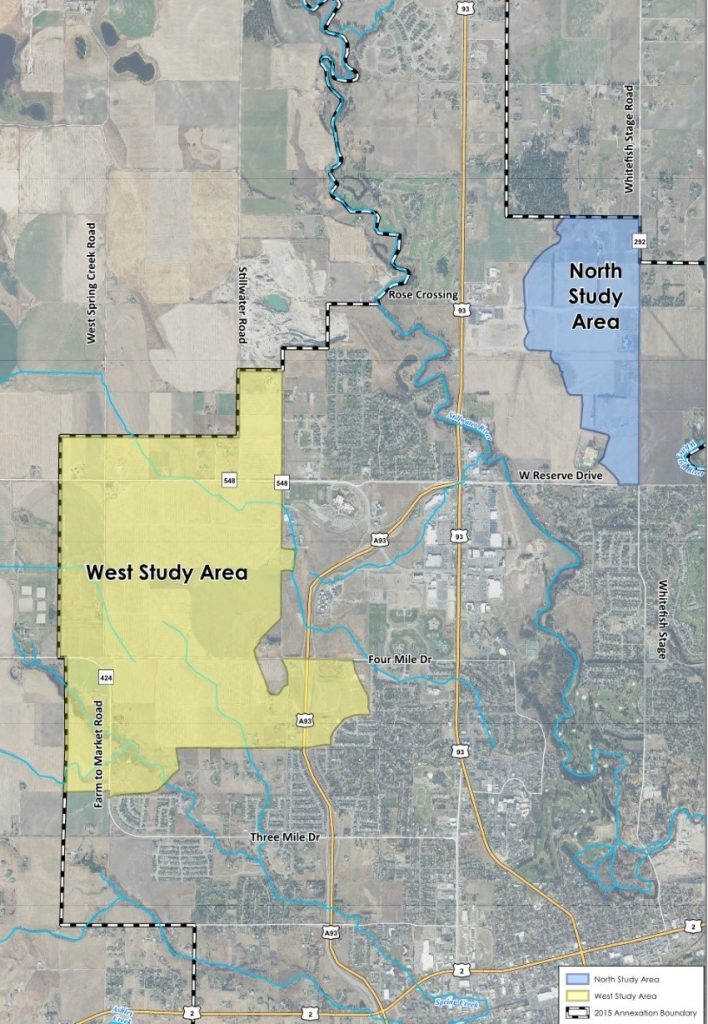 In 2018, the City acknowledged the need to update the original study for the following reasons:

The primary goal of the project was to provide clear recommendations to the City for managing stormwater runoff in the West and North Study Areas by:

One of the key assumptions in developing the list of recommendations was the amount of future impervious area that will occur within the City’s Annexation Policy Boundary. An outcome of the study was a recommendation that developers be held to the maximum impervious area percentage shown in Figures 4 and Figure 5. 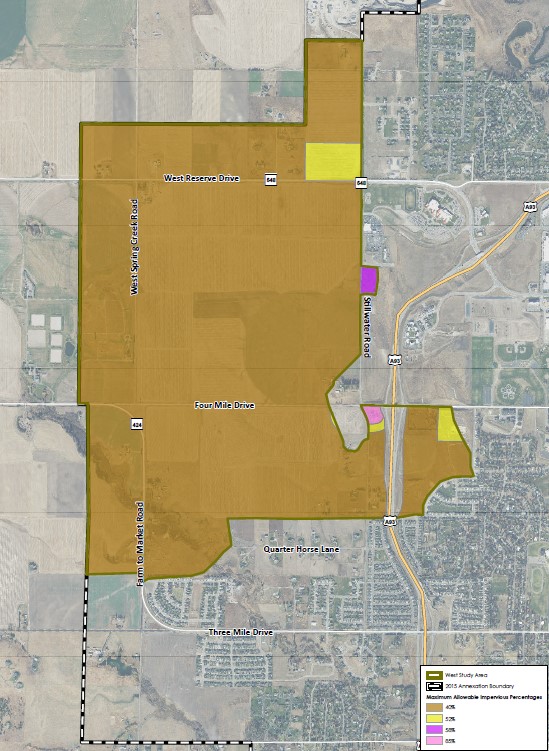 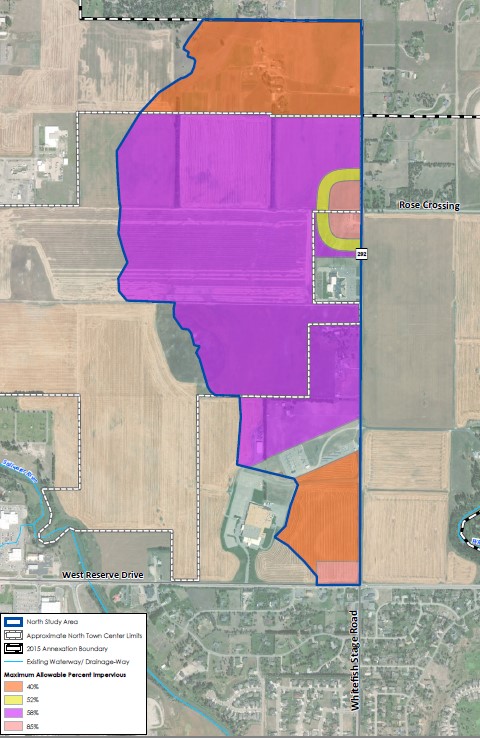 Future percent impervious area was calculated following a three-step method which is briefly described below:

Stormwater management requires a truly comprehensive planning approach. Land use patterns, development densities, geographic constraints, Low Impact Development standards, and financial impacts are all important aspects that need to be considered when developing master plans. Perhaps more importantly than other areas, the close collaboration between the planning and public works professions is needed to ensure we continue to create environmentally sustainable and resilient communities.

Zach Magdol, PE, contributed to this article. He is a Project Engineer in the Lehi, Utah office of AE2S.

Kevin Smith, AICP, has a broad background in municipal government, including specific experience in the fields of public works and planning. He has managed the development and administration of capital and operating budgets for various city functions including street, water, engineering, water reclamation, storm drainage, landfill, and electric light operations. He is currently the Operations Manager for the Sioux Falls, SD office of AE2S and assists clients with financial planning and asset management initiatives.  Kevin is a graduate of South Dakota State University and holds a master’s degree from Western Illinois University, with an emphasis on regional planning.